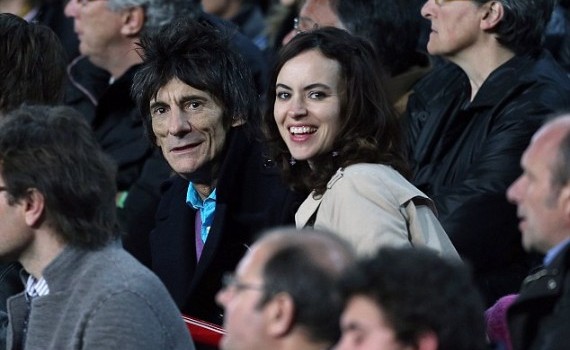 Barcelona have a magical evening yesterday after beating Milan (4-0), without any margin for doubt for the second leg of  the Champions League. A game that no one wanted to miss, even Ron Wood, the guitarist of  Rolling Stones. Ron Wood  is a confess Blaugrana fan, and he was in Camp Nou vibrating like one in the stands.

The legendary guitarist, was accompanied by his wife, Sally Humphries,  whom he married last December in full Christmas. Wood enjoyed a great time at least four times, the number of goals scored by the club to give back them the European tie.

The widely regarded as the greatest rock band of all time made ​​headlines a few months ago to launch his greatest hits entitled GRRR! including two new songs , Doom and Gloom and One More Shot. Maybe Ronnie Wood noted the spectacular environment that is lived in the Camp Nou, and he wanted to give a concert at the stadium Barca in their next 2013 tour!